Jesus isn’t White, he is an Arab 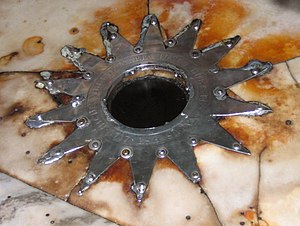 The place where — according to the Christian folk tradition — Jesus was born. The site is located in Bethlehem, precisely in the cave under the Church of the Nativity. (Photo credit: Wikipedia)

There’s a big, unending debate about whether Jesus is White or is he Black? But I think Jesus has to be an Arab. No other people have suffered as much as the Arabs do today.

Technically, Arabs were not recognized as a people when Jesus was born in Bethlehem, the city that would eventually become the home to the Christian religious revolution.

But they existed. They just didn’t know what they were in for in a world that would be scarred over the next 2,000 years by racism, bigotry and discrimination.

The United Nations has condemned Israel’s demolition of 30 Palestinian properties in the occupied West Bank, saying it displaced families for the second time in less than two weeks.

“I am concerned about the destruction of Palestinian structures in the Jordan Valley yesterday,” UN Humanitarian Coordinator James Rawley said in a statement on Wednesday.

“The demolitions resulted in the displacement of 41 people, including 24 children, and affected another 20. Both refugee and non-refugee families were affected.” the statement added.

“Some of the families were displaced for the second time this month and a number of donor-funded structures were among those demolished.”

Israel’s civilian administration of the occupied West Bank had no immediate comment on the demolitions.

A group of 36 NGOs last week urged Israel to stop demolishing Palestinian homes, hours ahead of a visit by US Secretary of State John Kerry aimed at revitalising Middle East peace talks.

“Demolitions often occur to facilitate the expansion of illegal Israeli settlements, with 60 percent of demolitions occurring in Palestinian communities close to settlement zones,” rights groups and charities including Oxfam, Amnesty International and Human Rights Watch said in a joint statement.

“Since the resumption of the peace process in July, Israel has destroyed 207 Palestinian homes and property in the occupied West Bank, displacing 311 Palestinians, over half of whom are children,” they said.

Meanwhile, Dutch water supplier Vitens has ended a partnership with Israeli water company Mekorot due to the “political context”, the Dutch company said on Wednesday.

The decision comes days after a visit to the Mekorot offices in Israel by the Dutch Trade Minister Lilianne Ploumen was abruptly cancelled.

In a statement, Vitens said it had come to the conclusion that it was “extremely hard” to work with Mekorot on future projects “because they cannot be taken out of the political context”.

Mekorot, which provides water to Israelis and to Jewish settlements in the occupied Palestinian territories, has been accused by Dutch media of denying water access to Palestinians.

According to the World Bank, a third of Palestinian territories are cut off from the Israeli water system and Israelis draw out a far bigger share of the water supply than agreed in the 1995 Oslo II accord.

But last week Israel, Jordan and the Palestinians signed a water-sharing initiative at the World Bank that could see the building of a desalination plant and a pipeline from the Red Sea to the Dead Sea.

Epilepsy has its blessings. If you must have a life-threatening brain condition, my current version of epilepsy inspires terror and optimism.

Epilepsy definitely could kill me, but it likely won’t.  More drivers with epilepsy probably die from texting than seizing. No one really knows what causes some people to seize, so we are free to imagine: everything from too much alcohol to not enough of it, from work-related stress to Republican control of Congress. Whatever stirs upset could trigger seizures. I’m inclined to blame the Miami Heat.

Most epilepsy sufferers don’t even suffer from it. My epilepsy, to me, is mostly gossip. I’ve gone to bed a couple of times, slept peacefully, then awakened to amazing tales. I’m told my love is so true even brainstorms can’t blow it down. They say that from inside Seizureland I still pucker at the woman of my dreams, or as we now call her, “the Widow Freeman.”

I seize while I sleep. If I should die before I wake, from Status Epilepticus, (SE) non-stop seizures, I won’t know it. I actually entered SE last month. Three consecutive seizures wracked my body while I slept. Through them all I told Sharon I loved her and that she was beautiful, even though I could not retrieve her name.

The scariest consequence of epilepsy is SUDEP, Sudden Unexpected Death by Epilepsy. It takes you out without seizures.  You are perfectly healthy… except that you’re dead.

But for me, even SUDEP has a silver lining. Aside from painlessness, it’s an excuse to ask the existential “What If?” What if today was my last? A good question for everybody, but who wants to get unnecessarily real on a daily basis?  Reading about the lethality of SUDEP broke my heart, but thinking about living my last days with Sharon mended it again.

Other good news: SUDEP only happens in 1 in 1000 epilepsy cases per year.  Most seizures are as mine have been, the scary, unexplained and harmless result of overly-excitable neurons.  I have meds now, so far well-tolerated, with helpful side effects. Like most anti-seizure drugs mine, Levetiracetam, calms brain activity.  It helps me speak more slowly.  (Where was Levetiracetam when I had verbal diarrhea at the Second City?) It helps me sleep better too which in itself may stop the seizures.

Since the diagnosis, my husbandly clout has skyrocketed. My wife knows that any morning she could wake up next to the tragic kind of stiff, so yes, she’ll let me have the last drumstick.

Because I’ll most likely sleep through my death, Sharon knows someday she may have to clean me off the bed, tell my kids, and explain things to my mother.  She’s already lived through several parts of the wifely nightmare. She’s awakened to find the man she loves possessed by a break dancing alien.  She has an address in that terrifying psychic place, where I lie cold, but chooses not to reside there.   Still, several times a night, she will rest her hand on my back to check for breathing. I can almost feel the relief in her fingers.

Epilepsy denies us the luxury of denial. In more than a third of cases drugs don’t control seizures.  Every supper really could be the last, every hug, every episode of “Orange Is The New Black.”  Any given good night kiss could be the kiss to end them all. We knew that last night. Imagine how happy we were this morning!

Epilepsy has brought new delight to every dawn we share. We have always loved waking together. The Jewish “thanks for waking me up” prayer was a habit for me BEFORE my seizure life.  We take the gift of my regaining consciousness way less for granted now, which makes it that much sweeter.

I remember waking once in an ambulance and another time inside a CT scanner. Opening my eyes and seeing only the face of my beautiful wife is the aurora borealis, a total eclipse, and the acceleration disk of a black hole all rolled into one.  Spectacular beyond compare! Sharon remembers a pre-dawn tonic cry blaring from my throat just before she lost control of her bedroom and husband to burly firemen. She thought she was watching my body shut down and KNEW life as we had lived it was over.  Yet here I am, literally happier than ever. Miraculous!

Nothing bad happened THIS morning.  Last night featured neither gasps nor spasms.  This day has not been interrupted by maverick neurons.

Epilepsy has given us new love of waking up. We daily thank the gods for the immense blessing of each morning.  We rise to wallow in endless possibilities and eagerly embrace the boundless opportunities before us.

But we are in no hurry to seize the day.