C2ST Artist in Residence Aaron Freeman pretends to interview Stanford University Neurobiology professor Robert Sapolsky on the difference between the brains of Chicago Cubs fans and those of lesser beings.  According to Sapolsky part of the difference may have  to do with higher sustained levels of the neurotransmitter dopamine.

Effects of victory and defeat on testosterone and cortisol response to competition: evidence for same response patterns in men and women.

Source: Effects of victory and defeat on testosterone and cortisol response to competition: evidence for same response patterns in men and women. – PubMed – NCBI

It’s not easy being a female athlete. Being feminine and being sporty don’t always go hand-in-hand, and we’re socially conditioned to prioritize one (hint: femininity) over the other. Seriously. There was a push before the London Olympics to force female boxes to wear miniskirts so the audience could more easily tell the men from the women. Because you have just got to be able to tell which athletes are worth watching and which ones aren’t, am I right?

This itself is eye-rollingly stupid, but as technology and medicine improve, we’ve also started enforcing gender conformity on the molecular level.

Indian sprinter Dutee Chand was disqualified days before she was scheduled to compete in the 2014 Commonwealth Games. Not for doping or other types of cheating, but because she has excess testosterone in her body. Excess for her sex, that is. Apparently, the Sports Authority of India (SAI) started getting suspicious of Chand when she beat her personal best in the 200-meter earlier this year. She won two gold medals at last month’s Asian Junior Championship, which prompted the SAI to test Chand for “female hyperandrogenism.”

Athletes Show That Sex and Gender Are Not Easily Defined | Care2 Causes.

FIFPro: An athletes’ union that gets it right.

via FIFPro: An athletes’ union that gets it right. 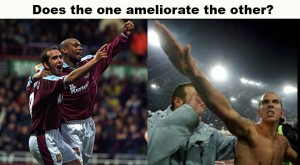 If the new coach of your favorite team has a pro-Mussolini tattoo on his bicep and is known for giving the straight-arm, palm down fascist salute, you could be forgiven if your “spidey senses” tingle. Never mind that is how we used to salute the American flag. Paolo di Canio is the new coach of the struggling UK football club, Sunderland United, and an accused fascist and racist. He admits to admiration for El Duce, but also calls the WWII Italian leader dishonest.  Di Canio defends himself against charges of racism by pointing out that some of his best friends are black.

Former Alabama governor George Wallace was, in his day, a poster child for the reptillian brain.  But as an older, sicker man he completely abandoned his segregationist past. Remembering him I can not help but believe that yesterday’s or even today’s political positions are not the end of somebody’s story.  It would not be useful to judge the whole of my politics because I like Ronald Reagan. I at least have the decency to feel guilty about it.  I am inclined to trust what di Canio says of his own heart if for no other reason than that’s what the person I want to be would do.  But also I am moved by the pictures of his intimacy with black players. Those pictures say to me that whatever his political opinions, and lord knows we all have some odd ones, he’s doesn’t dislike people solely based on superficial characteristics. That for me is enough cut a brother slack, especially if he wins.