C2ST Artist in Residence Aaron Freeman pretends to interview Stanford University Neurobiology professor Robert Sapolsky on the difference between the brains of Chicago Cubs fans and those of lesser beings.  According to Sapolsky part of the difference may have  to do with higher sustained levels of the neurotransmitter dopamine. 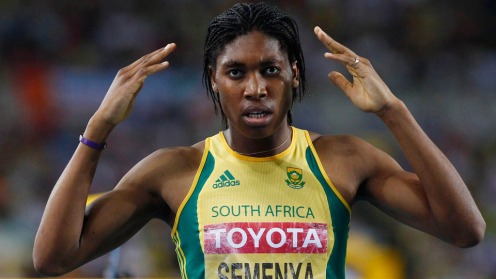 It’s not easy being a female athlete. Being feminine and being sporty don’t always go hand-in-hand, and we’re socially conditioned to prioritize one (hint: femininity) over the other. Seriously. There was a push before the London Olympics to force female boxes to wear miniskirts so the audience could more easily tell the men from the women. Because you have just got to be able to tell which athletes are worth watching and which ones aren’t, am I right?

This itself is eye-rollingly stupid, but as technology and medicine improve, we’ve also started enforcing gender conformity on the molecular level.

Indian sprinter Dutee Chand was disqualified days before she was scheduled to compete in the 2014 Commonwealth Games. Not for doping or other types of cheating, but because she has excess testosterone in her body. Excess for her sex, that is. Apparently, the Sports Authority of India (SAI) started getting suspicious of Chand when she beat her personal best in the 200-meter earlier this year. She won two gold medals at last month’s Asian Junior Championship, which prompted the SAI to test Chand for “female hyperandrogenism.”

Athletes Show That Sex and Gender Are Not Easily Defined | Care2 Causes.

One of the most moving aspects of the Boston Marathon bombing is that swiftly after the bombing, runners, who are very similar to regular people, rushed toward danger to help the injured.  We humans really LIKE each other.  I am reminded of WIKILEAKS “Collateral Murder” video wherein even knowing there was an armed US helicopter hovering overhead people still rushed to help the wounded.  The US shot the helpers too but the point is they were willing to risk even death by American gunners to give aid.  What does that tell us about the strength of our connections to each other?  Yay for our side!

“No, I am not going 10,000 miles to help murder, kill, and burn other people to simply help continue the domination of white slavemasters over dark people the world over. This is the day and age when such evil injustice must come to an end.”  – Muhammad Ali

The New York Times, FoxNews, NPR et al throw hissy fits when celebrities refuse to hate on command.  The cash-filled bags of blow dry that read news-flavored press releases at us currently heap scorn and  ridicule upon Dennis Rodman for acting like there is no reason to heap scorn or ridicule upon North Korea.

We got no quarrel with Kin Jong Un.  Rodman thinks it’s just fine to visit a country that has never done or threatened anything harmful to the US.  Not being a professional war apologist he has the loony idea that visiting places he’s never seen and meeting people he does not know is good.  Rodman’s apparent belief, like King and Ali’s embrace of the anti-vietnam war movement is a ruinously foolish notion that mush be met with hoots and abuse because it risks killing the mean world chimera.

The US does not now nor as it ever faced any threat to it’s territory or resources or political system – at least from outside the country. No one has ever or ever wanted to do to us what we regularly do to other people, overthrow their governments and occupy their lands.  We have no enemies, certainly no military ones.  Al Qaeda and the Taliban just want us to stop invading and killing.  So to justify a trillion dollars of military spending every year, we must all just agree that there are threats “out there”.  No matter how small, poor, far away or nonviolent a country is when the geniuses in DC declare its government is “hostile” or an “enemy” good American are expected to stand and snarl.  No matter how obvious, overwhelming and empirical the evidence to the contrary, we must all agree that, “The king DOES TO have clothes”! And brook no dissent from the point.

Then come knuckleheads like Rodman, King and Ali who did not get the “don’t think for yourself” memo.  These guys look at the world, then behave as if, in identifying enemies,  the US political and mediatocracy have a seventy-year history of perfect wrong.  In our lifetimes the most reliable indicator that a foreign government poses no threat and intends no harm to the US is a declaration by the US government and press that is does.

Thanks for reminding us Dennis.

“We got invited, we’re gonna go and hopefully have some fun”. Isn’t Rodman about twice as tall as Kim Jung-Un?

Fox, NPR et al are not buying any North Korean attempt to de-terrify Americans. “They are just evil dammit! claim our official storytellers. “Their satellite launches are really offensive missile tests, their cultural exchanges are a plot to undermine our defenses and their request that we our end of state of war with them and withdraw the 30,000+ troops we have stationed on their border is a transparently hostile attack aimed at lessening tensions in the region”.  We can’t let the get away with it!  – http://fxn.ws/YBY3Jy