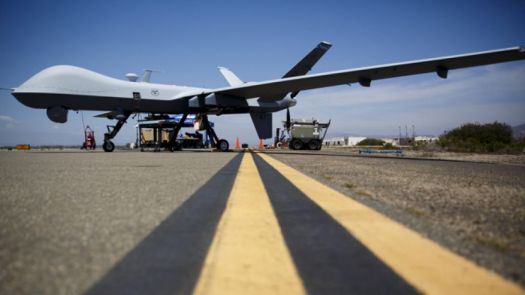 The U.S. is killing far more people than intended in some drone strikes, according to a report likely to raise new questions about the Obama administration’s reliance on drones in its battle against Islamic terrorists.  The Intercept, in a wide-ranging set of articles on the U.S. drone program, reported that in one five month-period, nearly 90 percent of people killed by strikes in an operation in northeastern Afghanistan were not the intended targets. The news outlet reports documents detailing Operation Haymaker show that the campaign, that lasted between January 2012 and February 2013, killed more than 200 people, but only 35 were the intended targets. CLICK NOW TO PLAY ADVERTISEMENT The White House and Pentagon boast that the program is precise and civilian deaths are relatively minimal.

From Economist.com – HOW many times can one man die? At least four, in the case of Abubakar Shekau, the slippery leader of Boko Haram. Nigerian security forces celebrated his demise in 2009, 2013 and 2014, only for him to pop up again, disconcertingly animate, on camera. When Chad’s president said in August that his troops had killed Mr Shekau, the jihadist was resurrected once again, this time with a voice recording. “Woe unto liars that had claimed I am dead,” said the voice. “Nobody can kill me.”

This relatively mild-mannered dispatch raised questions of its own. Most of what is known about Africa’s most notorious terrorist derives from his gun-wielding, slave-touting videos. If he were still at large, would he not release a film in his usual more robust style? Most probably, he is indeed alive. Whether he is injured is impossible to say. Experts dispute how old he is, or how religiously scholarly. Perhaps he is not one man at all. The army accused Boko Haram of using body doubles after he was “killed” last year. More

I’m with Carly on this one.

A Nazi salute may – or may not – land you in jail in Switzerland. Apparently, you are safe if you manage to prove that it was intended as a personal statement and not a marker of political affiliation, the country’s highest court has ruled.

The decision, entitled “Hitler salute in public not always punishable,” implies the following: “Unless one is proven to be spreading racist ideology, they’re free to express a personal sentiment or belief with the gesture.” That is what Lausanne’s Federal Tribunal said Wednesday, according to AP.

Pope Francis has urged the people of Latin America to stand up to the world’s capitalist system and change the world economic order by creating a “truly communitarian economy” based on distribution of goods among all.

Communist crucifix for #PopeFrancis who lashes out at #capitalism on Bolivia tour — RT News.